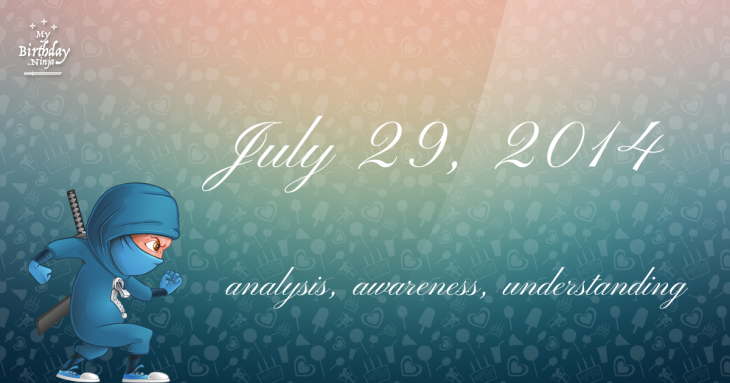 Here are some snazzy birthday facts about 29th of July 2014 that no one tells you about. Don’t wait a minute longer and jump in using the content links below. Average read time of 10 minutes. Enjoy!

There are 36 days left before your next birthday. You will be 7 years old when that day comes. There have been 2,521 days from the day you were born up to today. If you’ve been sleeping 8 hours daily since birth, then you have slept a total of 840 days or 2.30 years. You spent 33% of your life sleeping. Since night and day always follow each other, there were precisely 85 full moons after you were born up to this day. How many of them did you see? The next full moon that you can see will be on June 24 at 18:42:00 GMT – Thursday.

Try another birth date of someone you know or try the birthday of these celebrities: June 19, 1950 – Ann Wilson, American singer-songwriter and guitarist (Heart); May 10, 1965 – Linda Evangelista, Canadian model and actress; June 5, 1960 – Leslie Hendrix, American actress.