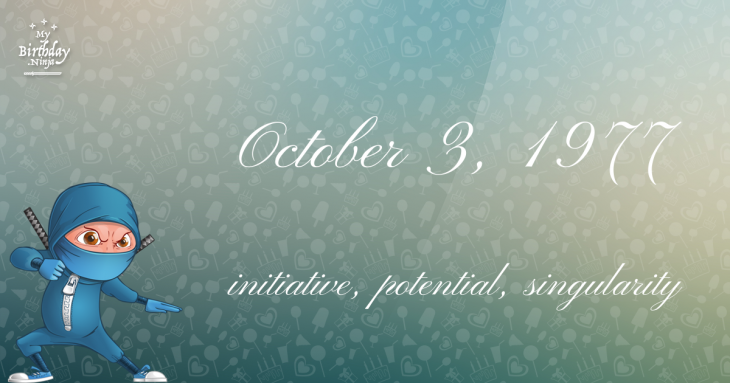 October 3, 1977 was a Monday and it was the 276th day of the year 1977. It was the 40th Monday of that year. The next time you can reuse your old 1977 calendar will be in 2033. Both calendars will be exactly the same! This is assuming you are not interested in the dates for Easter and other irregular holidays that are based on a lunisolar calendar.

There are 238 days left before your next birthday. You will be 46 years old when that day comes. There have been 16,563 days from the day you were born up to today. If you’ve been sleeping 8 hours daily since birth, then you have slept a total of 5,521 days or 15.12 years. You spent 33% of your life sleeping. Since night and day always follow each other, there were precisely 561 full moons after you were born up to this day. How many of them did you see? The next full moon that you can see will be on March 7 at 12:42:00 GMT – Tuesday.

If a dog named Gagi - a Yorkipoo breed, was born on the same date as you then it will be 200 dog years old today. A dog’s first human year is equal to 15 dog years. Dogs age differently depending on breed and size. When you reach the age of 6 Gagi will be 40 dog years old. From that point forward a small-sized dog like Gagi will age 4 dog years for every human year.