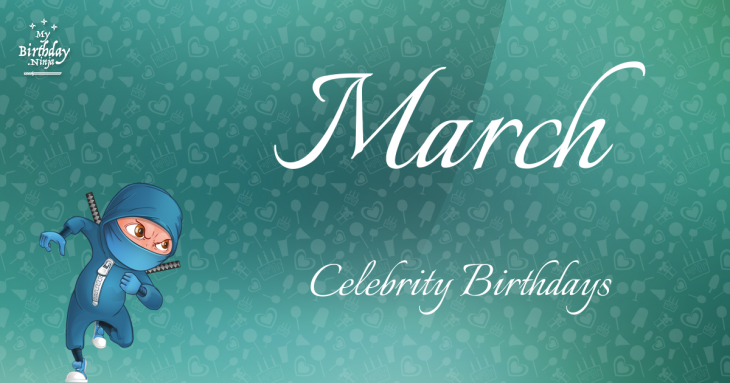 Tip: Click the free March celebrity birthdays ninja poster above to save the high quality version. A new design will be generated for you everyday. Collect all 16 ninja poses.

The following 2,489 celebrities were born in the month of March. The savvy list includes actors, actresses, models, singers, rappers and producers. A random sample was chosen for each day. Click the    after the name to explore the birth date info.

Zodiac signs for March are Pisces ♓ and Aries ♈. The modern birthstone for March is Aquamarine while the mystical gemstone (based on Tibetan origin) is Jade.

Did you know that coffee and word games are an excellent combination to sharpen your vocabulary? Let’s give it a quick spin. Within 30 seconds, how many words can you think of from these letters OSHOLWRU? Check your answers here: Words with these letters OSHOLWRU. (Sponsored by WordFinder.Cafe)