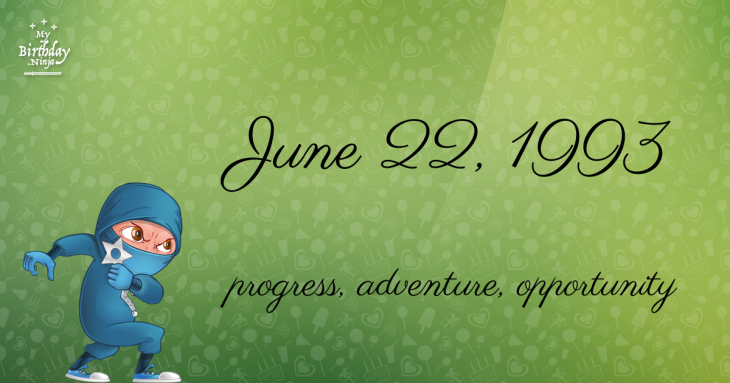 Here are some snazzy birthday facts about 22nd of June 1993 that no one tells you about. Don’t wait a minute longer and jump in using the content links below. Average read time of 11 minutes. Enjoy!

June 22, 1993 was a Tuesday and it was the 173rd day of the year 1993. It was the 25th Tuesday of that year. The next time you can reuse your old 1993 calendar will be in 2027. Both calendars will be exactly the same! This is assuming you are not interested in the dates for Easter and other irregular holidays that are based on a lunisolar calendar.

There are 138 days left before your next birthday. You will be 30 years old when that day comes. There have been 10,819 days from the day you were born up to today. If you’ve been sleeping 8 hours daily since birth, then you have slept a total of 3,606 days or 9.87 years. You spent 33% of your life sleeping. Since night and day always follow each other, there were precisely 366 full moons after you were born up to this day. How many of them did you see? The next full moon that you can see will be on February 5 at 18:30:00 GMT – Sunday.

If a dog named Garratt - a Pekingese breed, was born on the same date as you then it will be 136 dog years old today. A dog’s first human year is equal to 15 dog years. Dogs age differently depending on breed and size. When you reach the age of 6 Garratt will be 40 dog years old. From that point forward a small-sized dog like Garratt will age 4 dog years for every human year.

Did you know that coffee and word games are an excellent combination to sharpen your vocabulary? Let’s give it a quick spin. Within 30 seconds, how many words can you think of from these letters QJAPIURPUIJMR? Check your answers here: Word scramble QJAPIURPUIJMR. (Sponsored by WordFinder.Cafe)

Your birthday numbers 6, 22, and 1993 reveal that your Life Path number is 5. It represents progress, adventure and opportunity. You possess the curiosity of a cat and long to experience all of life.

The Western zodiac or sun sign of a person born on June 22 is Cancer ♋ (The Crab) – a cardinal sign with Water as Western element. The ruling planet is Moon – the celestial body of moods and emotions. According to the ancient art of Chinese astrology (or Eastern zodiac), Rooster is the mythical animal and Water is the Eastern element of a person born on June 22, 1993.

Fun fact: The birth flower for 22nd June 1993 is Rose for devotion.

When it comes to love and relationship, you are most compatible with a person born on February 26, 1966. You have a Birthday Compatibility score of +189. Imagine being in love with your soul mate. On the negative side, you are most incompatible with a person born on April 11, 1981. Your score is -128. You’ll be like a cat and a dog on a love-hate relationship. Arf-arf, I want to bite you. Meow-meow, stay away from me!

Base on the data published by the United Nations Population Division, an estimated 134,310,651 babies were born throughout the world in the year 1993. The estimated number of babies born on 22nd June 1993 is 367,974. That’s equivalent to 256 babies every minute. Try to imagine if all of them are crying at the same time.

Here’s a quick list of all the fun birthday facts about June 22, 1993. Celebrities, famous birthdays, historical events, and past life were excluded.

Try another birth date of someone you know or try the birthday of these celebrities: February 6, 1946 – Kate McGarrigle, Canadian singer-songwriter and accordion player (Kate and Anna McGarrigle and Mountain City Four) (d. 2010); April 11, 1979 – Sebastien Grainger, Canadian singer-songwriter and guitarist (Death from Above 1979); January 26, 1996 – Tyger Drew-Honey, English actor and singer.